30 Years in Design:
An interview with Mark Tomkins 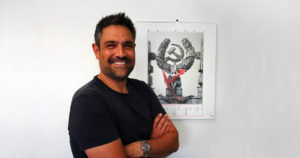 By 30 Years in Design:
An interview with Mark Tomkins
3rd August 2019

This year is a special anniversary for Aubergine co-founder Mark Tomkins because it marks 30 years since he began work in the graphic design industry.

In that time, he’s witnessed the changes caused by desktop publishing and the internet. He’s seen big players come and go. And in one of those weird coincidences, last month he found on Ebay one of his first pieces of paid work – a promotional calendar for Unipart – that he’d spent years looking for.

There are few people who have weathered the wide-ranging changes of the last three decades, but Mark is one of them. Back in 1989 when Mark first started as a junior designer, the methods were very different to the computerised systems we have today. For each piece of artwork, he’d have to paste individual lines of text using cow gum and draw the lines by hand before a long-winded production process that involved two sessions in a dark room, film splicing, scanning and then making the printing plates.

“If we made a mistake, we used a razor blade to scratch it off the artwork, re-make it correctly and splice it back in. And so, yes, things took much longer, but there were more people in an artwork team in those days. The advent of desktop publishing computers, as they were called when introduced, essentially removed many jobs from the process.” 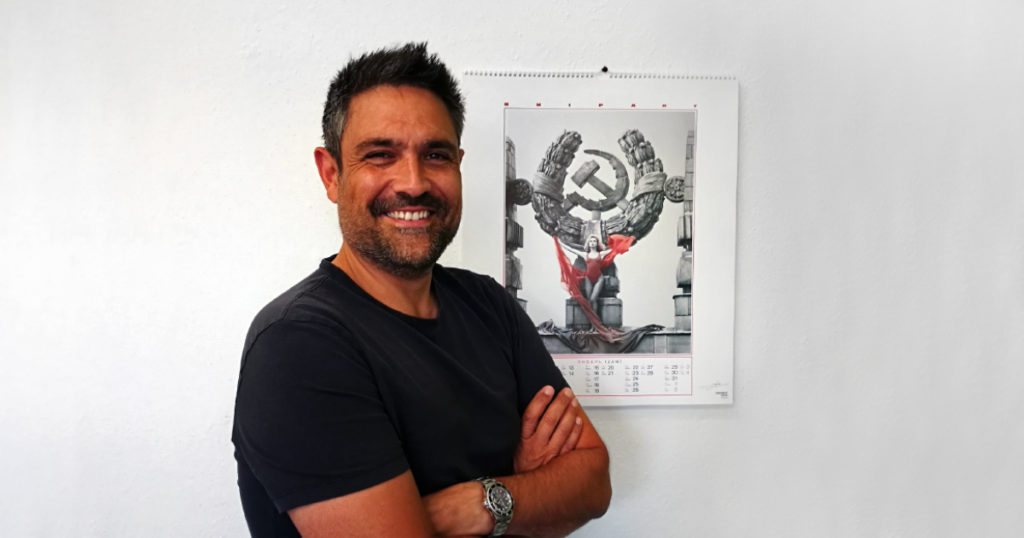 It was this type of painstaking work that carried out for the Unipart calendar, but as an added bonus, he also attended the photoshoot. The calendar very much a product of its time – in more ways than one:

“The Berlin wall had just come down and the concept was for Lord Litchfield to photograph glamour models around Moscow’s famous landmarks in the spirit of Glasnost,” Mark recalls.

“I was a green 19-year-old junior designer surrounded by old school Soho agency types, all wearing black trousers and black t-shirts with very large Timmy Mallet glasses, juxtaposed with some of the world’s most beautiful women. They were asked to stand in -20°C wearing basically nothing, while looking wistful and stoic at the same time. On reflection, it was hilarious and awful at the same time.”

Delighted to have been reunited with one of his early pieces of design, the calendar now hangs in the office (with one of the more politically correct and least revealing images on show). We all agree the lines are very well drawn.

Mark thrived in the world of work, in contrast to his time at school. He left secondary school with one O-Level (in Art) and won a place on merit at Amersham Art College to study an HND in Graphic Design.

“To retain my place, I had to take an English O-Level three times to scrape a pass to stay in college. I was expelled a week before the end of the course, having been caught by the principal’s secretary for doing doughnuts in my Ford Capri in the car park. To this day, I still don’t know if I officially passed or not. I never got a certificate. That’s probably a clue.”

Mark had roles as a studio manager, senior graphic designer and marketing manager before starting Aubergine with his wife Bekki, also a designer, in 2003.

“At the time we founded Aubergine, little thought was given in the industry as to whether the thing being designed actually got the message across and worked as a successful marketing tool. We saw an opportunity in communicating with the client better, explaining the processes and helping them better understand what’s involved in producing a piece of good design.”

“There is a view that creativity is a precise science that can conform to a schedule. Actually, few things that are unique can be created according to a schedule. Production lines of biscuits are predictable because they are making the same thing over and over. Fulfilling a brief is different from one project to the next – and so there is no way of knowing with any precision how long it will take. This is where the art of communication and expectation is brought to bear.”

Aubergine now has a team of 11 people and is his proudest achievement.

“Although I’m not involved in the actual design work these days, I enjoy meeting new people, listening to their ideas and putting that into a direction for the design and development teams. But what I enjoy most is seeing the creativity the team show me when they have finished their work. I’m lucky enough to be surrounded by some exceptionally talented people.”

With so many achievements in design, it’s interesting to think that it was a career in flying that Mark once hoped for. “I did pursue the idea of joining the RAF as I have a passion for flying, but my lack of maths ended that career path,” he says. However, he did manage to combine his love of aviation with design when he was asked to work with de Havilland Aviation, a company that reconditioned ex-military jets, and he designed the Red Bull livery for a de Havilland Sea Vixen that appeared at airshows the world over.

“I was also lucky enough to experience many flights in an ex-Swiss airforce de Havilland Vampire two-seater jet with their test pilot, Clive. We were in the air over Southampton in 2005 when Ellen MacArthur returned up the Solent on her return from her world record-breaking solo circumnavigation. She had a flotilla of ships and boats around her and we (me and Clive) performed an unplanned victory roll over her in the air.”

The internet has brought a new set of issues and expectations that need to be managed and it frustrates him how difficult it is to convey just how expensive something as slick and cool as the Apple website is to create: “Talented people spend a lot of time creating brand experiences like Apple. With the furtherment of technology, the expectation in terms of how long this kind of design takes – and therefore how much it costs – is at odds with reality,” he says.

Online website builder services are part of this because they make it seem like a good website is something that anyone can do, given the right tools. But Mark says:

“Why should a plumber or florist have any clue how best to construct a website and what’s the right thing to say and where? The website builder tools themselves aren’t bad – they are just limited. The value we provide comes from knowing how to translate human behaviour into a successful marketing piece. It’s very common for a client to come to us having tried to design or build something themselves first and failed, or because they realise they do not possess the skills or depth of knowledge to complete the task.”

Mark believes it is likely that as online website builder tools become more sophisticated, the creative/digital industry will split further in two – on one side will be the resources for people to do things themselves, while on the other will be businesses with the expertise and understanding to produce the best results. Companies like Aubergine, with many years’ experience and the ability to keep abreast of technology, are so valuable because it’s very hard for an individual to be an expert in so many areas. Mark says:

“In the web design area, it’s about making the website work harder in terms of a sales tool. That involves more than tech – it requires marketing skills to make sure the messaging and signposts of a website are as optimum as they can be.”

“Those entering the creative sector now have different and greater challenges to tackle if they are going to succeed to that when I started. The raw, creative talent is still a base requirement – you can’t teach someone to have talent – but there’s an expectation that a designer is also a coder as well as possessing planning and organisational skills to help the client understand what they want and how it should be best executed – all whilst proving that service at arms-length, over email and at the cheapest price” Mark says.

“Whilst the technological developments since starting in the creative have been like science fiction coming to life, would I consider embarking on the same career path if I started now?

“Where’s the keys to that plane…?”